46 photos
Boudhanath (Nepali: बौद्धनाथ) is one of the holiest Buddhist sites in Kathmandu valley and is located on the Northeastern outskirts of Kathmandu city. It's prime location on one of the ancient trade routes connecting Tibet and Nepal makes it in turn one of the principal pilgrimage sites for Tibetan and Nepalese Tantric Buddhists today, and is among the seven UNESCO World Heritage Sites in the Kathmandu Valley.

The Stupa is a large dome-shaped monument that represents mind of the Buddha, and when viewed from the top it resembles a mandala (diagram representing the Buddhist cosmos). And as in all Tibetan mandalas, four of the Dhyani Buddhas (Buddhas of enlightenment) mark the cardinal points, with the fifth Buddha, Vairocana, enshrined in the center (in the white hemisphere of the Stupa). The five Buddhas also meant to personify the five elements (earth, water, fire, air and ether), which are represented in the Stupa's architecture.

The base consists of three large platforms, decreasing in size; the large bottom-most level symbolizing Earth, and the two circular plinths above supporting the hemisphere, symbolizing water. The base and one of the circular plinths are accessible to visitors, while the upper-most plinth is off limits except on certain days of the year. As at Swayumbhunath, Boudhanth is topped with a square tower bearing the omnipresent Buddha eyes on all four sides. Above this is the third eye, symbolizing the wisdom of the Buddha.

The square tower is topped by a pyramid with 13 steps, representing the ladder to enlightenment. The nine levels of Boudhanath Stupa are meant to represent the mythical Mt. Meru, center of the Buddhist cosmos; and the 13 rings from the base to the pinnacle symbolize the path to enlightenment, or "Bodhi" — hence the Stupa's name. The triangular shape is the abstract form for the element of fire. At the top of the tower is a gilded canopy, the embodiment of air, with above it a gilded spire, symbolic of ether and the Buddha Vairocana. Prayer flags tied to the Stupa flutter in the wind, carrying mantras and prayers heavenward. 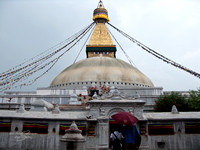 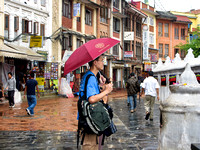 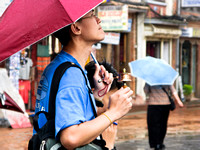 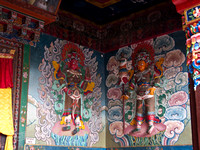 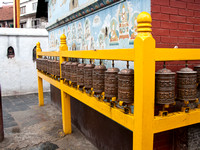 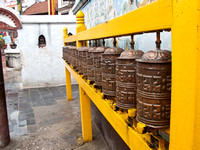 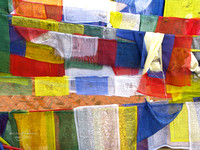