24 photos
Pashupatinath temple (Nepali: पशुपतिनाथको मन्दिर) is the largest Hindu temple of Lord Shiva in the world located outside of India. Situated on the banks of the Bagmati river in the eastern part of Kathmandu city, the temple serves as the seat of national deity, Lord Pashupatinath.

In Hindu mythology, it is said that Lord Shiva grew tired of his abode in Mount Kailash and searched for a tranquil place to meditate and arrived upon the Katmandu Valley. Upon arriving on the banks of the Bagmati river, he took the form of a deer to evade attention, and in turn the title of Pashupatinath was bestowed upon him. Originating from Sanskrit meaning "Lord of the animals", Lord Shiva is represented in this form at Pashupatinath temple.
It is believed that Lord Vishnu exposed Shiva’s metamorphism and during the struggle that ensured, Vishnu managed to break the horns of the deer, which were then used to form the Linga in the temple. The origin of the Linga or the temple is unknown, but it is known that the temple laid buried during several earthquakes and was considered lost, until some cow herders dug around the spot to find the lost temple.

Today Pashupatinath Temple is one of several UNESCO World Heritage Sites in Kathmandu City, and is a unique one in that non-Hindus are not allowed to enter the central temple that houses the Linga. However, most of the adjoining sections of the temple are open to visitors and can view the elevation of Pashupatinath temple alongside the Bagmati River.

Very few of the original temple buildings stand today due to a series of earthquakes that struck Nepal in the early 19th century. The temple complex as it stands today was reconstructed in the aftermath of 1913 Earthquake and is from a distinct pagoda style of architecture.

Final rites are carried out behind the temple on the banks of the Bagmati in the belief that Shiva blesses these people and releases them from the cycles of rebirth if their ashes are scattered in the Bagmati, synonymous to the final rites performed alongside Ganges in Varanasi. Incidentally, Bagmati originates in one of the glaciers around Mount Kailash and eventually merges with the river Ganges in India. 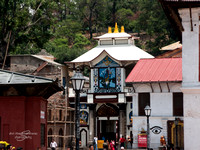 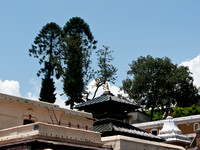 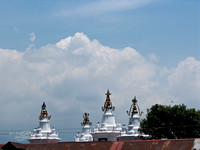 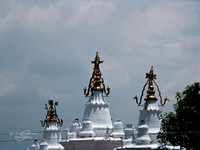 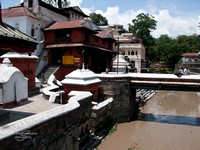 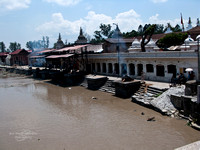 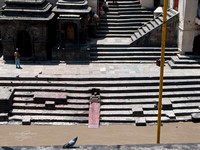 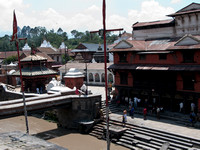 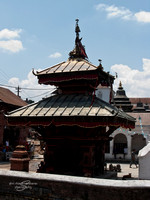 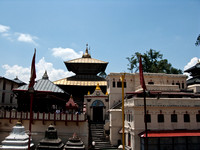 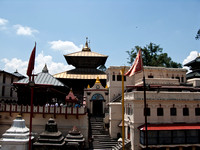 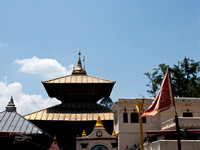 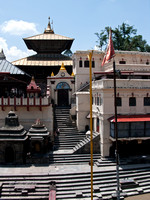