48 photos
The Kathmandu Durbar square or Hanuman-Dhoka Durbar Square as it known locally is at the heart of Kathmandu city and is considered to be one of the important heritage sites in the Kathmandu valley and is now a UNESCO World Heritage Site. The name Hanuman-Dhoka derived from the statue of Hanuman (monkey like god from Hindu mythology) that was installed outside the royal palaces in 1672A.D by King Pratap Malla. The square is a dense complex of beautiful temples and shrines, both Hindu and Buddhist, all still active and dating back to early 9th century. The square epitomizes a cultural and religious significance to the people of Nepal as until recently all of Nepal’s kings were crowned and their coronations solemnized here. Additionally, the royal palace at Durbar square was king’s official residence until recently as the beginning of 20th century.

Today, after its 1934 expansion the Durbar square houses thirty five courtyards, fifty temples and several key royal buildings, the most notable ones being Taleju temple, Shiva-Parvati temple and Kumari Ghar. The Taleju temple was built in 1564 by King Mahendra Malla for Goddess Taleju, the royal deity of the Malla kings. The temple is today off bounds to the causal tourist and is opened only once a year for Darshan (Viewing). The Kumari Ghar is a three storyed quadrangle building with lavish decorations and fine wood carvings, and is the home of ‘Kumari’. ‘Kumari’ meaning “child” in Nepali is considered to be an incarnation of Goddess Taleju and is often seen peeking through the bay windows from the third floor. This ritual that was started in 1757 by King Jaya Prakash Malla still continues today, wherein a young girl selected by the royal priestess coronated as a ‘Kumari’ lives in the Kumari Ghar until puberty after which, it is said that the Goddess Taleju bequeaths her influence on the ‘kumari’ for her to continue her normal life. 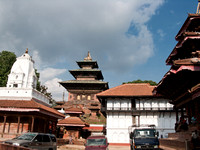 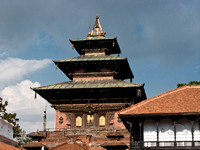 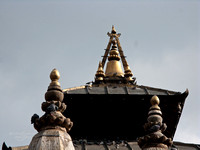 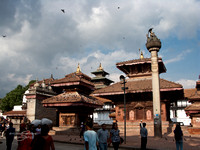 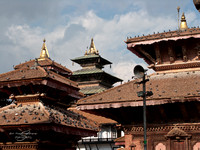 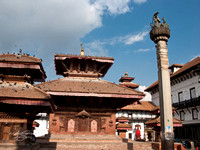 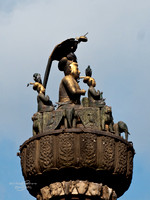 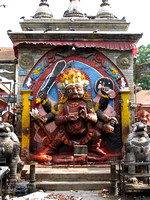